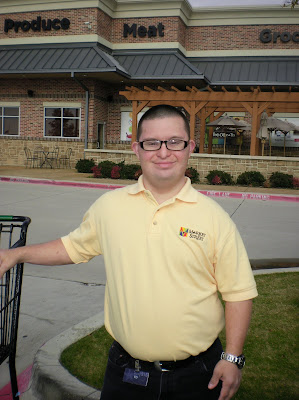 Looking back on this year, through my work with VOCES Action, I have met a lot of conservative advocates, candidates and leaders. There are many Americans who have boldly stood up for our freedoms, demanding a return to our traditional American values. But of all these outstanding Americans, the most exceptional person, the one person who has impacted me the most, is a young man named Eddie.
Those who know Eddie Sendejo know what a pleasure it is to be around this young man. Eddie is one of those special people who have an extra chromosome, a chromosome that makes him a unique and loving individual. Those who come in contact with him come away feeling blessed by this exceptional, extraordinary and loving person.
The 36-year-old Hispanic man was born in San Antonio, Texas. He was born with Down syndrome. In spite of his limitations, he graduated from high school, was involved in public speaking, participated in the Special Olympics, and was one of the managers of a football team. He loves to attend his church, be with his family, pray for his family and friends, help with the little babies and take care of his cat.
Eddie is a responsible citizen who goes to work, pays his taxes, and involves himself in the community. Eddie works for Market Street, a grocery store in Lewisville, where he greets people, bags groceries, and helps people take groceries to their cars. He attends community and civic events. I asked Eddie who has been his favorite president; he promptly responded, “George W. Bush!”
I visited with Eddie for a morning. When I arrived at his home, he was finishing feeding his niece, Olivia. He loves children and all the children of his cousins love him. Eddie gives them their milk bottles and plays with them. Eddie loves to attend Rock Point Church in Flower Mound, listening to the worship and the sermon messages of his Pastor, Ron Holton.
Eddie invited me out to brunch, to eat one of his favorite burritos and drink a cup of coffee. He paid the bill with his debit card. Eddie talked to me about his family, his values, and his cat. When it was close to the time for him to check in for his job, he was diligent to sign in and begin on time. Everybody at the store loves Eddie. The customers are happy to be helped by Eddie. Eddie respects all his co-workers and is happy to help in whatever circumstance.
Eddie Sendejo is an exceptional person because he models what we stand for: life, liberty and the pursuit of happiness. His transparent honesty and his generous love for others remind us of what makes our country great. I see many grouchy people around complaining for all sorts of things, and even though we may be upset for the economy, unemployment, high taxes, and out-of-control government, it is important to remember that attitude is always a virtue and we can learn from the attitude of others like from Eddie Sendejo, someone who really inspires me to continue fighting for our values. Someone who demonstrates why faith, family and friends are important.
Here is a special video made about my time with Eddie the other day.
http://www.youtube.com/watch?v=9Dpea5mnFYc&feature=player_embedded
Down Syndrome, also known as Trisomy 21, is caused when there is a triplication on the 21st chromosome. People with Down Syndrome have 47 chromosomes instead of 46, like people without Down Syndrome. This is the reason it is called Trisomy 21, being there are three 21st chromosomes instead of the usual two.
Prior to 1975, it was not mandated for children with Down syndrome to be educated, it's believed there were one million children with Down syndrome and other disabilities who weren't being educated. In the early 1990s, the Americans with Disabilities Act required that accommodations be made in the workplace when possible, and prohibited discrimination. The Americans with Disabilities Act of 1990 (ADA) is a law that was enacted by the U.S. Congress in 1990. It was signed into law on July 26, 1990, by President George H. W. Bush, and later amended with changes effective January 1, 2009. As a result, adults with Down syndrome are achieving more than ever before.
Here is a good article to read: http://www.nads.org/pages_new/news/ruletheworld.html
Posted by VOCES ACTION at 9:06 AM