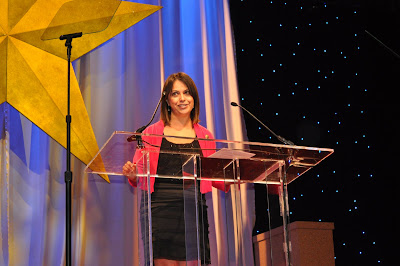 Adryana Boyne Speech at Republican Party of Texas 2010 Convention
By Texas GOP Vote
Adryana Boyne gave a speech to the delegation at the RPT 2010 Convention.
Ivan Andarza, an attorney from Austin and an official spokesperson for the RPT, quoted:
Without a doubt, one of the highlights of the 2010 Texas Republican Convention was the energetic speech delivered by Adryana Boyne. Her speech accomplished the goal of allaying the fear that Hispanic outreach necessarily requires us to water down our conservative message. As she stated, our pro-family and pro-economic freedom agenda are universal and even if delivered in Spanish, they are one in the same. We are fortunate with having someone like Adryana Boyne who can take our conservative message to all corners of our state in English and Spanish. What more could we ask for?
Manny Rosales, Deputy Director of Coalitions for the RNC, quoted:
I like to congratulate Adryana Boyne on an excellent presentation to the delegates during the Texas GOP Convention. Her message of Inclusion was well received and by the applause well regarded.
The transcript and video of Adryana's speech are below:
Hello Texas Republicans!
The Republican Party is the party that offers true hope and change for America! Not the Obama Hope and Change that has greatly increased our national debt and prolonged the recession! But hope to bring government back into the hands of the American people. And change to government that respects its Constitutional limits, and believes America is an exceptional country. What makes our country exceptional? Our founding values and respect for rule of law!!
We must continue to reach out to Latinos in order to stop the liberal take-over of our country. The majority of Latinos hold to conservative values: we are pro-life, pro-family, hard working and believe in free-enterprise. Some escaped socialist governments; they know the danger of big government and the lies of entitlement. Many Latinos proudly serve in our armed forces because they love America.
Republicans are stronger with Latino voters. We just need to show them that we represent their conservative values. Some say that in order to attract new faces to our party we should change our message. I disagree! The Republican message is a conservative message that benefits all Americans.
Democrats think they can make Texas a blue state. But we can show that they are wrong and that the majority of Americans are fed up with their progressive agenda. Let’s unite in electing Republicans in presumed Democrat strongholds – let’s elect solid conservatives like Francisco Quico Canseco, Stephen Broden, Bill Flores and others . Let’s unite in reelecti 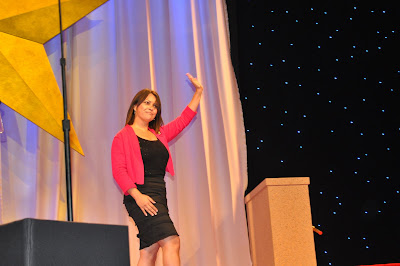 ng Gov Perry and other Republicans.
Let’s reach out to conservatives across all ethnic and racial bounds. Together, we can return our government back to the hands of the American people!
Adelante y Vayan con Dios Tejanos Republicanos! Let’s go forward and God bless you Texan Republicans!
http://www.youtube.com/watch?v=_kL_w9b6Pag&feature=player_embedded
Posted by VOCES ACTION at 5:41 PM

VOCES Action on the stage with Gov. Rick Perry at the Texas Republican Convention 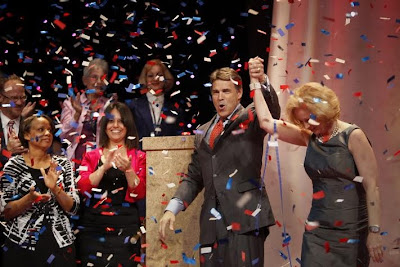 Daryl and Adryana Boyne from VOCES Action and their son Nathan were invited by Gov. Perry to be on stage during the Governor's speech to the Republican Convention of Texas. The Governor is a man with integrity and strong social and fiscal values and he will continue fighting for those in our state. Governor Perry gave a speech where he recognized all strong Texas with the values of fiscal and loyasl conservatism.
Here are the stand of the Governor on the issues:
ECONOMIC DEVELOPMENT
Texas has consistently been ranked as one of the best places to do business in the nation under Gov. Perry’s leadership.
§ Aggressive Job Creation.
§ Record Property Tax Reductions.
§ Texas is Succeeding with a Strong Economy and Friendly Business Climate.

As the national and global economies struggle to recover from their financial woes, Texas is displaying strength that is built on conservative fiscal discipline.
§ Overcame Budget Shortfall.
§ Reducing Spending.

10TH AMENDMENT: FIGHTING INTRUSIVE WASHINGTON POLICIES
Folks in Washington should take a closer look at the Tenth Amendment of the U.S. Constitution, which clearly states the preeminence of states’ rights in the structure of our country. The time has come to assert those rights, and remind the federal government that it was created to serve states, not the other way around. Left unchecked, Washington will continue digging our country into a hole of debt, increased government intrusion and the loss of personal liberty.
§ Out-of-control spending.
§ Cap and Trade.

BORDER SECURITY
We cannot have homeland security without border security. Under Gov. Perry, Texas has been a leader on border security while the federal government has faltered. Under his leadership, Texas has put more boots on the ground, more technology to use, and more targeted operations to dramatically reduce all crime along the border.
§ Surge Operations.
§ Transnational Gang Initiative.

HEALTH CARE/TORT REFORM
Under Gov. Perry, Texas has reformed its child protective services, insured more of Texas’ needy children than ever before, and increased health care investments by more than $20 billion while promoting prevention and wellness programs to cut down on future health care costs. Gov. Perry has also led the most sweeping lawsuit reform in the nation, cracking down on junk asbestos claims and frivolous medical malpractice lawsuits. Now thousands more doctors, including specialists, are practicing in Texas, bringing greater access to quality health care for Texans.
§ Cracking Down on Frivolous Lawsuits.
§ Increased access in underserved areas.
§ Protecting Children.
§ Texas Protects its Most Vulnerable Citizens.
§ Tough on Fraud.

ENVIRONMENT AND NATURAL RESOURCES
Under Gov. Perry, Texas is moving aggressively to create a diverse portfolio of energy sources, including renewable, natural gas, coal and nuclear power to meet the needs of our growing population in an eco-sensitive manner. Texas is a national leader in reducing emissions and known pollutants and advancing renewable energy sources. Texas has done so while balancing the need for environmental improvements with fostering economic growth, new investment and job creation.
§ Renewable Energy.
§ The Texas Emissions Reduction Plan.

SOCIAL CONSERVATIVE
Gov. Perry is the most pro-life governor Texas has ever had and has implemented a number of significant reforms to protect life and strengthen Texas families across our state.
§ Abortion
§ Banning Embryonic Stem Cell Research
§ Protecting Traditional Marriage
§ Promoting Adoption

PROPERTY RIGHTS
More than 90 percent of the land in Texas is privately owned and Gov. Perry is committed to protecting Texans’ rights as landowners. Gov. Perry worked to protect private property rights by responding quickly to the U.S. Supreme Court Kelo decision by prohibiting the use of eminent domain and the condemnation of private property for economic development purposes.Working with the legislature, Gov. Perry helped pass the strongest property rights protection in the state’s history through House Joint Resolution (HJR) 14. Gov. Perry campaigned for this measure, which voters enshrined in the Constitution by approving Proposition 11, so the legislature can’t weaken it without the people giving their permission at the ballot box. When voters added Proposition 11 to the Constitution this November, they forever prevented
Posted by VOCES ACTION at 2:06 PM