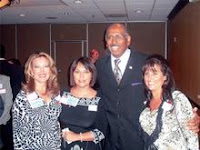 L to R: Dianne Costa, Adryana Boyne, RNC Chairman Michael Steele and Edna McDaniel meet in Washington to address conservative issues.
Three local women went to Washington D.C. to represent VOCES Action, a non-profit corporation representing conservative values among Latinos. Highland Village resident Adryana Boyne, National Director of VOCES Action, along with board members, Edna Cuellar McDaniel (Flower Mound) and Dianne Costa (Mayor of Highland Village), attended the Republican National Assembly annual convention. In an effort to include and empower the Latino voice, VOCES, (Spanish word for voices) a 501c3, and VOCES Action, a (501c4) sister organization, have been launched in the Highland Village area with an aim at communicating conservative values within and through the Latino and non-Latino communities, empowering them to get involved in protecting and promoting their conservative values in their homes, cities, states and country, as well as serving as a bridge between communities. Ms Boyne believes that the majority of American Hispanics hold to conservative values. “In spite of holding to these conservative values, their positions have been minimized, ignored and even distorted,” said Ms. Boyne. Ms. Boyne and Ms. Costa were invited as speakers, alongside other outstanding conservative Latinos like Leslie Sanchez, Dr. Henry Ramirez (first Hispanic official in the White House cabinet under former President Nixon), former Secretary of Commerce Carlos Gutierrez and former Attorney General Alberto Gonzalez.
Republican National Committee Chairman Michael Steel congratulated the three women for the work they do among Latinos with the organization VOCES Action. Ms. McDaniel was invited to encourage the conservative vote among young people. Ms. Costa was invited to form part of a group to work towards a GOP solution for the immigration situation. Ms. Boyne was invited back to D.C. to become a national surrogate for the RNC to the Spanish Media. She has been a spokesperson for the Republican Party in Texas for the last three years. She was nominated and elected to be a surrogate at the national level. She is well known for her strong conservative stance and her ability to effectively communicate issues. The three women, along with VOCES Action President, Dr. Daryl Boyne advocate for conservative values such as pro-life, traditional marriage and individual freedoms, coupled with personal responsibility.
- Special to The News Connection
We at VOCES ACTION were delighted to endorse Mr. Richard Rios for RNHA Chair and his slate. His website is
http://www.riosforchair.com/

We are aware that elections are not held based on political slates and that each position is voted individually. The measure of success in an organization lays on its leadership ability to work as an effective team and its diversity to ensure that there is balance and representation from all.
Chair Richard Rios California Chair
1st Vice-chair Gloria Campos Mid-West Director, Illinois Past Chair
2nd Vice-chair Laura Drain Virginia
Treasurer Rafael Rivadeneira Illinois State Chair
Assistant Treasurer Frank Tijenera Colorado State Chair
Secretary Tibi Ellis Nevada ChairFor more information go


"I am happy to endorse Mr. Richard Rios and welcome his strong initiative to unite resources and partner with other local and national Hispanic organizations. Alongside RIchard I am also happy in endorsing Laura Drain, a dedicated and dynamic worker. I have personally witnessed the involvement of Laura in promoting conservative values and the Republican Party at diferent events in different states. I extend this endorsement to Gloria Campos, Tibi Ellis and Rafael Rivadeneira. All of them are Republicans with integrity, responsability and accountability who are committed to work as a team in the mission of representing well conservative Hispanics "

"As the mother of 2 soldiers I can certainly attest that one of the critical areas for the future will be our military. Rios is someone who sought to serve early in his life, demonstrating his belief in having a strong military. Even though he was unable to serve due to medical reasons, he has still followed his "service" heart, as reflected in his many acts of volunteerism such as during the aftermath of Hurricane Katrina. I would encourage everyone to support Richard Rios due to his history of being a statesman rather than a politician - showing his selfless dedication to the greater good of everyone "

Dianne Costa
Mayor of Highland Village,TX
Board of Directors of VOCES ACTION


"Impressive! Richard Rios is a Leader with a vision and strategic plan that fleshes out a team approach, uniting Latinos and non-Latinos from coast-to-coast, with a common purpose/goal of moving the conservative platform forward, thus, preserving the integrity of our constitution, "We the people..." I endorse Richard Rios for National RNHA Chair. "

Highland Village resident Adryana Boyne speaks at the Denton County Republican Party meeting.
ABOUT THE AUTHOR
Netsky Rodriguez
Email:bobweir@thenewsconnection.com...
Getting the conservative word out to Hispanics is an effort that Highland Village resident Adryana Boyne has made her passion. At the recent Denton County Republican Party meeting, held in the communications room at Lewisville Medical Center, Ms. Boyne was the featured speaker. As the recent organizer of VOCES (Voices Offering Conservative Empowering Solutions), Ms. Boyne is on a mission to educate Hispanics through Spanish and English television, radio and other media on conservative viewpoints. Her husband, Dr. Daryl Boyne, is the National Director of VOCES.
As a Latina and an activist for conservative values, Ms. Boyne has observed the great need for representation of conservative values among Latinos. While the conservative perspective is largely absent from Hispanic media, Ms. Boyne has had the opportunity during the last three years to present conservative viewpoints on Spanish and English television, radio, and other media. Although she has had to debate with those who disagree, including liberal state representatives, she has seen the great opportunity to influence Latinos for the values that matter most. “We have seen Latinos emboldened to stand for their innate conservative values,” said Ms. Boyne.
In an effort to include and empower the Latino voice, VOCES, (Spanish word for voices) a 501c3, and VOCES Action (a 501c4), sister organization, have been launched in the Highland Village area with an aim at communicating conservative values within and through the Latino and non-Latino communities, empowering them to get involved in protecting and promoting their conservative values in their homes, cities, states and country, as well as serving as a bridge between communities. Ms Boyne believes that the majority of American Hispanics hold to conservative values. “In spite of holding to these conservative values, their positions have been minimized, ignored and even distorted,” said Ms. Boyne.
The effort of VOCES is to:
• Target the Latino communities • Change rhetoric and soften language• Unite in conservative issues• Spend more time talking about fiscal responsibilities and moral values• Pick our battles wisely• Educate all people on issues• Include forums from other cultures
Among the many endorsements Ms. Boyne has received, Congressman Michael Burgess wrote, “I am proud to stand behind the work Adryana and Dr. Daryl Boyne are doing at VOCES. As the fastest growing demographic in the country, it is important that Latinos have a strong conservative voice and representation that reverberates across the country.”
Highland Village Mayor Dianne Costa, who is on the Board of Directors of VOCES, added, “The Hispanic population is very much in need of someone who understands the culture and values, and Adryana is extremely capable of delivering the message across all spectrums of our nation. Daryl brings a wealth of political knowledge as well as a savvy understanding of how the message is best delivered. Together, they are a powerhouse that will create a synergy to bring all who share the same values and perspectives into a formidable entity, VOCES. Without reservation I wholeheartedly endorse Dr. Daryl and Adryana Boyne.” Another board member, Edna Cuellar McDaniel, said, “Adryana educates her audience on conservative issues and equips them for action with a deep love for God, family and country. Adryana is a must-have-right-now to bridge the gap!”
Texas State Senator Jane Nelson said, "We have always had strong Hispanic voices in the conservative movement; individuals who believe in economic prosperity, supporting families and loving our country. These voices are stronger when united, so I expect great things to come from VOCES." The VOCES organization feels that the biggest source for growth of the conservative ranks comes from our Latino citizenry. It is their effort to reach out and include these citizens.
August 12-16, 2009 Ms. Boyne, as President of VOCES, along with Board of Director members Mayor Dianne Costa and Edna Cuellar McDaniel will be traveling to Washington where Ms. Boyne and Mayor Costa will be speakers alongside Rep, Marco Rubio, former Speaker of the House of Representatives of Florida and candidate for the US Senate for Florida. The three of them will be at the event for Richard Rios, candidate for Chairman of The Republican National Hispanic Assembly.


Hispanics and the GOP have much in common
July 10, 11:14 PMDenton County Republican ExaminerDianne EdmondsonIt’s a demographic given: In less than a decade, Hispanics will become the majority of Texas residents. Many political pundits predict that this increased Hispanic population will spell the death knell for Republicans throughout Texas. But does that prediction have to become reality?
It’s widely believed – due to much media hype – that Republicans view Hispanics as “the enemy” in some kind of “them versus us” contest. Yet none of the Republicans I know feel that way at all! While we believe that our laws –including those on immigration – should be obeyed, we do NOT translate that belief into a racial bias.
There is so much commonality between conservatives and traditional Hispanics – our views on pro-life, family values, high moral standards. But finding that common ground and showing Hispanics how well they would fit into the GOP tent seems to be difficult for most Republicans to do.
Enter a dynamic Denton County Republican Latina, Adryana Boyne, who brings her strong conservative beliefs unashamedly to the table as she speaks -- in both English and Spanish – to the Hispanic community. A native of Mexico who became a US citizen in 1994, Adryana has been on radio, television and in many newspaper articles. As a national delegate to the Republican convention last year, she caught the attention of many photographers and her smiling face appeared in many publications. Recently, she formed VOCES in Action, an organization dedicated to motivating, informing and equipping Latinos in America to help regain conservative values in our country.
Now Denton County Republicans have the opportunity to hear her words of wisdom concerning our outreach to her fellow Hispanics. She will be the featured speaker Thursday evening, July 16th at the monthly meeting of Denton County Republicans. The meeting, which is held in the second floor community room of the Lewisville Medical Center, will begin at 7 p.m. and is precede by a 6 p.m. social hour. All area Republicans are welcome to attend.
It’s high time that we learn how to find our common ground with Hispanics, and Adryana is just the person to show us how to do that!
Adryana Boyne at the 2008 GOP National Convention.