Margaret Thatcher: An Inspiration to Many, but only One of a Kind 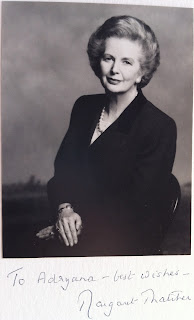 In May of 1979 in my birth country of Mexico, as a young articulated teenager, nearing the end of the 9th grade and interested in learning how to debate, my teacher told me: “Adryana, a woman just became the Prime Minister of the United Kingdom, named Margaret Thatcher. You could learn from much about debating skills” I remember going home, not being able to wait to sit in front of our Color Sony Trinitron TV and watch Televisa “24 Horas with Jacobo Zabludovsky”. I still remember listening to Zabludovsky giving the news again, and I saw, for the first time, the face of that woman which my teacher had talked about. Sometimes I still close my eyes and have that clear picture in my mind of what many of us now see in videos and photos: Margaret Thatcher wearing her blue suit, surrounded with people and microphones and cameras and questions. I remember the people yelling around her, and her bold attitude as she spoke. I was absolutely enchanted. My English was not very good in those years, but due to my English teacher being British, the little English that I did know was British. https://www.youtube.com/watch?v=A23PQCndPYU

I appreciate having a father who, besides coaching me in the art of public speaking, always instructed me with history and lessons on values. At the time, the United Kingdom was in a horrible state, as my father explained to me. I was blessed in having the opportunity to grow up with a father who diligently taught me what was wrong in world events, such as the Castro regime in Cuba, the Communist regime in Eastern Germany, specifically the Berlin Wall, and the situation in the UK. The fact that it was the first time for a woman to become Prime Minister of the UK was a remarkable success. Not only that, but she was a woman with conservative principles. Regardless of whether you agree or not with her positions on issues, the current Prime Minister of the United Kingdom, David Cameron, himself recently made the statement that, “she took a country "that was on its knees" and making it "stand tall again". Because Margaret Thatcher fought her way to a seat in Parliament, to the leadership of her party and then to lead of her country and she won the backing of the British people three times in a row." "She will be remembered for the great political battles she fought. Taking on the union barrons, privatising industry, unleashing enterprise, rescuing their UK economy, letting people buy their council homes, winning the Falklands war, strengthening their defences and helping to win the Cold War.” What a woman Margaret Thatcher was! Please watch and listen to the following video of a description of what happened back then in the UK. Listen to Lady Thatcher debating regarding Trade Union Power.

My admiration and stronghold on conservatism started right there with Prime Minister Thatcher. Her actions encouraged me, a 9th grade young Mexican woman. Back then , I was not as interested with Mexican politics, American politics or UK politics, but Margaret Thatcher planted a seed of hope in my heart to become someone who could speak for her values, even in spite of opposition. Never did I imagine that little more than a decade later, I would be living in the United States of America, married to my husband, Daryl, and mother of a child, and becoming a close friend and prayer partner with the woman who was, at the time, the daughter-in-law of Margaret Thatcher. Diane Thatcher (now Diane Beckett) was then married to Mark Thatcher. Diane had a son, Michael, and a daughter, Amanda, who was few months younger than my son Nathan.

They all became dear to the Boyne family and ministered to us in many ways. I cannot describe all of our experiences together, but this personal friendship and love that we have cherished for over 20 years with Diane and the Thatcher children- who are the only two grandchildren of Margaret Thatcher- is something that the Boyne family has always treasured. The recent death of Margaret Thatcher has deeply touched me and my family. My relationship with the Thatcher family was with her American family: Diane, and the children. I have expressed my sincere condolences and prayers to all of them, for I know how dear Lady Thatcher was to them. Yes, I did meet Mark Thatcher years ago and talked to him in person as well as over the phone. He was always kind with me, he had an extraordinary mother and father, and he also has two extraordinary children who were raised by an extraordinary mother. During the many years that my husband and I have served in Christian ministry, we spent a decade in the foreign mission field, partly in Costa Rica and mainly in Mexico. Every year during the Summer, we would return to the U.S. and spend most of that time in the house of the Thatcher’s in Highland Park. In the house library, upon the fireplace mantle, was a beautiful picture of Margaret Thatcher. For us, the faces of Lady Thatcher and her husband Dennis were ever familiar to us. Unlike most young people their age or younger, our sons Nathan and Samuel grew up knowing perfectly well who Margaret Thatcher was and what she had done for the UK and for America as a warrior for freedom and conservative values, always appreciating and admiring her.

I am the proud owner of many books authored by Lady Thatcher, with even a couple of them dedicated to me personally by her: “The Downing Street Years” and “The Path to Power.” I also proudly own two personally dedicated photos of Margaret Thatcher. I am sharing one of them in this article. In those books, Lady Thatcher speaks candidly about the formation of her character and values, and the experiences which propelled her to the very top in a world ruled by men. The personal photos I have with the members of the Thatcher family are something that I am not ready to release at this moment.. Margaret Thatcher was nicknamed the Iron lady by former Russian President Mikhail Gorbachev.

The Iron Lady: A hard nickname to bear, but, as the Bible says in Proverbs 27:17, “As iron sharpens iron, so one person sharpens another.” That is exactly how Margaret Thatcher’s actions shaped me. Young people need people to inspire them and sharpen them, as Margaret Thatcher did to me Just weeks ago, before I flew to London to attend the Leadership Institute http://www.leadershipinstitute.org/ at the Wellington College, http://www.wellingtoncollege.org.uk/ I tried to arrange a private brief visit with Lady Thatcher. Of course I was fully aware of her fragile health in recent years, and I regularly prayed for her health. But we still had the hope to go and greet her, hold her hand and let her know how much we appreciate her great contributions to her country and to the Western world, as well as the inspiration she was for me and my family. Sadly, due to her fragile health, such a visit was not possible. If the circumstances had been different, we may have been able to visit with her before her departure with the Lord. My son and I took our city trip through London, hopping from place to place. We passed by 10 Downing Street, the place where, although not Margaret Thatcher’s home since her resignation in 1989, I chose to pray for her and for her family.

I must share that, a few years ago, a well-known pastor told me, “Adryana you are the Hispanic version of Margaret Thatcher,” to which I responded, “ Thank you very much, but no, I do not deserve such a great honor to be compared with such a great woman. I still have a lot to learn in my life. I still have to learn from her strength and her fearlessness to opposition. She faced without fear those who frowned upon her for being a woman and for her conservative principles. I have learned from her that being part of a minority group is no reason to prevent me from fighting for my principles. It does not matter that I disagree with others, for I can express my differences.

No one can or should compare him or herself with Margaret Thatcher. Not even her own grandchildren use her name with arrogance and pride. Michael and Amanda Thatcher are special because who they are as individuals. They have been successful in their studies, sports and personal goals. Amanda Margaret Thatcher, a college girl, is an extraordinary woman of faith with a melodious voice and a kind heart (and as my son Samuel says, she bakes good chocolate lava cakes). Michael Thatcher has always been so discreet, and prudent about his relationship with Lady Thatcher. I even saw this during the time while he was a member of my Board of Directors. The Thatcher grandchildren have demonstrated their own successes as young people on their own for whom they are, not because their last name and personal relationship with one of the most the most extraordinary woman in this century. Not only those grandchildren have not used her name to try to exalt themselves, but all the opposite they have always been humble and kind. Those grandchildren, just like many of us, have learned from Margaret Thatcher by inspiration, by example of her principles. We all know that there is not is not a British version of her, not an American version of her, not a Mexican version of her, not a Chinese version of her of any other version of her since each one of us are very unique in our own. As individuals, we all have our own set of successes and failures but regarding Margaret Thatcher : There is only one and she is matchless. May all we learn that inspiration and sharpening is a good and valuable legacy.


Adryana Boyne is a National Director of VOCES Action www.vocesaction.org, a Director of Development of VOTO Honesto http://www.truethevote.org/es/acerca-de and a Political Consultant. You can follow her at @AdryanaBoyne