Cathie Adams, New Chairman of the Republican Party of Texas! 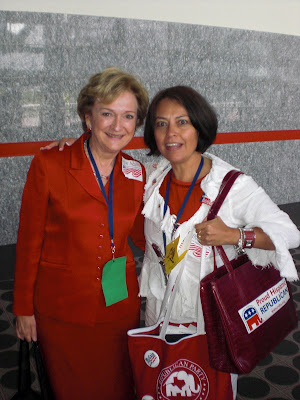 I had the opportunity to meet Cathie Adams for the first time two years ago, and through the last couple of years, I have had the opportunity to meet with her and have had one on one conversations and got to know her better. Cathie is a very kind and brilliant woman. She is a good listener and also gives good answers . Not only she listens but she takes in account what people think, and that is one of the things I most admire in her. She always would find time to talk with people. She is a wife, mother and a grandmother, but always cares for others as well. Cathie has been very committed fo many, many years in working voluntarily for her country at her own cost without seeking self-recognition but with the purpose to help our state and our country to return to the conservative values that our Founding Fathers had when this country was founded.

It breaks my heart to read in some articles that some people have attacked her because her Christian faith, when in fact, I think is because her faith that she has been strong and committed to care for other people's welfare and to work hard, so we may have a better America.
Yes, Mrs. Adams is a Christian woman and she is not ashamed of it. Many of us, Christians like to share our faith because we know Jesus. But let me tell you that a Christian in politics has a hardest time in been appreciated in other many areas and giftedness because the very first thing that liberals use to attack is our faith and with that they try to hide the fact that there are many other great talents that people have besides their strong faith. Cathie has endured harsh comments from the press and has stood strong because she knows Who gives her strength to continue. Cathie is a mature lady with a lot of skills and experience. She will make the GOP run in an adecuate manner in Texas and she will encourage the people of Texas to grow the GOP! Her fight is for the conservative values and for the freedom of our country and many of us stand strong on that. Cathie knows why the government should not get into people's lives and that government should be giving accountability to the people and not people to the government! She cares for the life of the unborn and the protection of the family. She cares for low taxation, for personal and fiscal responsability. She spends hours defending and protecting our freedom.
For those who attack Cathie and others like me, who are Christians involved in politics, let me tell you that we are not fearful of any of you because we will continue standing strong. Just like Cathie has and many of us are doing too! This country needs more people from Judeo-Christian principles to stand strongly in their values and to vote their values! So we are not going to stop just because people criticize us for being conservative. We need more people like Cathie Adams to stand strong for what is truth and right.

Cathie is a giving person, gives her time, work and resources to the community. I strongly support the role of Cathie Adams as the new GOP chair. She is very committed to outreach and engage with the Latinos and the other minority groups in Texas. Cathie is friends with Americans and immigrants from all ethnic backgrounds. I am one of them. Cathie has always made time for me to discuss the issues that we are concerned in our country. She is already doing an absolutely awesome job. Cathie has two decades of experience serving Texans and promoting conservative values. Cathie Adams has worked with leaders like us, reminding our elected officials who elected them to ensure conservative accountability. Cathie's dedication and commitment to conservative issues and no-nonsense politics is a winning combination. Cathie is an American who cares, who has the knowledge, a friend of America, a true amiga. Gracias Cathie!

We have a conversation with Mrs. Adams and the furue of the party here is the site. http://www.blogtalkradio.com/cantotalk/2009/10/29/lets-talk
Posted by VOCES ACTION at 12:49 PM 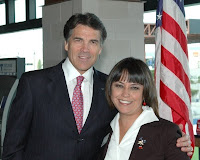 Gov Rick Perry has been Governor of Texas since December 21, 2000. Gov Perry stood on the steps of the state capitol, raised his right hand and took the oath of office as Texas’ 47th Governor. Every day since then he has stood for Texans’ conservative values, fought for principled solutions to tough challenges and worked to implement a clear vision for better schools, more jobs, safer communities and a brighter future.

Texans are safer because Gov. Perry ordered an aggressive border security initiative that is putting more boots on the grounds, more helicopters in the sky, and more resources into the hands of border law officers who are on the front lines of America’s homeland security efforts. Texas is shutting down illegal activity on the border, and the American homeland is more secure.

Perry has led the fight for better schools, signing into law a $2,000 pay raise for teachers and the country’s largest performance pay program. He has worked for higher standards and greater accountability. He ordered schools to spend 65% of tax dollars directly in the classroom—not bureaucracy—and required districts to open their financial books so taxpayers can see how their money is being spent. Today student test scores are rising, and a record number of children are going to college.

Perry has made job creation a top priority of his administration. Texas has gained more than 630,000 new jobs over the last three years, and more Texans are working today than ever before. Our business climate has been ranked one of the nation’s best, and we are attracting the technology-based jobs of tomorrow’s economy with new job investments.

Throughout his term in office, Gov. Perry has proven himself to be a leader who does what he believes is right, regardless of what critics may say.

He refused to raise taxes when Texas faced a record $10 billion budget shortfall in 2003. Instead, he became the first governor since World War II to sign a budget that lowered state spending. As governor, Perry has used his line item veto to cut over $2.5 billion in proposed spending—six times more than the last four Texas governors combined.

He led the battle to pass the country’s most sweeping lawsuit reforms. Junk lawsuits against medical providers have dropped off dramatically, and patients have better access to healthcare because thousands of doctors have returned to practice.

And in 2005, Perry signed a historic $15.7 billion property tax cut for homeowners and businesses that also includes new taxpayer protections against appraisal increases.

A fifth generation Texan, Perry grew up the son of tenant farmers in the tiny West Texas town of Paint Creek. The younger of Ray and Amelia Perry’s two children, he was active in scouting and earned distinction as an Eagle Scout.

Perry was one of the first in his family to go to college, earning a degree in Animal Science at Texas A&M, where he was also a member of the Corps of Cadets and a Yell Leader.

Between 1972 and 1977, Perry served in the U.S. Air Force flying C-130 tactical airlift aircraft in the Europe and the Middle East. He is a lifetime member of American Legion Post #75.

Prior to being elected Lieutenant Governor in 1998, he served two terms as Texas Commissioner of Agriculture and four terms in the Texas House of Representatives.

Perry married his childhood sweetheart, Anita Thigpen, in 1982. The Governor and First Lady are the proud parents of two children—Griffin, 23, and Sydney, 20. They are members of Tarrytown United Methodist Church in Austin.
For those who would like to know moe about Gov Perry please visit www.rickperry.org
Posted by VOCES ACTION at 7:25 PM

Recently, on October 8th, 2009 Governor Rick Perry appointed Eva Guzman to the Supreme Court of Texas. FOr more than a decade, Judge Guzsman has brought strong conservative values to the Texas Judiciary.
I met Judge Guzman few months ago and I was impressed with her speech of how she came to the Supreme Court.I have the honor to interview Judge Eva Guzman at the show My View and here is the link. The interview has interesting questons so all of you get to know Judge Guzman better. Thank you very much.
http://www.blogtalkradio.com/cantotalk/2009/11/12/Lets-talk
Posted by VOCES ACTION at 10:31 AM