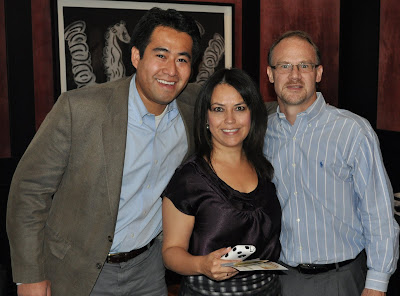 By Adryana Boyne
Recently VOCES Action had the opportunity to organize an event to welcome Israel Ortega of Heritage Libertad, the Spanish website from Heritage Foundation that covers conservative issues in Spanish.

VOCES Action strongly supports the work that Heritage Libertad is doing in providing Spanish news, opinions, reports and analysis from the Heritage Foundation’s conservative viewpoint. This is a resource that all people interested in outreaching and engaging Latinos with these values should know about.

The meeting was at Maximo's Cocina Mexicana where we enjoyed delicious food, fellowship and listening to our special speaker Israel Ortega, who shared with us about the purpose of Heritage Libertad.

I am impressed with the excellent job that Israel Ortega is doing with Heritage Libertad in helping the Hispanic community in the USA and beyond, and I feel blessed that he joins me as one of very few conservative Latinos appearing in the Spanish media on TV, radio and press.

Israel spoke first in Spanish and then in English. He began by saying, "Five words that people do not want to hear: 'I am from Washington, DC and I come to help you.'"

Israel explained about the downturn of the economy (13% unemployment) and the presence of the 50.5 million Hispanics – legal and illegal – currently residing in the US. He pointed out that Hispanics have differences among themselves; some want big government and some want small government with more personal responsibility. However, most Spanish speaking Latinos don't have enough information to make educated decisions. The Spanish media is mainly liberal and Latinos have let friends and family dictate their view on politics. When the left communicates more with the Hispanics, it's important that conservatives communicate their side to the Hispanic community. This is one of the reasons for the need to communicate conservative points of view in Spanish.

Libertad.org gives Spanish-speaking Americans access to the top-flight research and informed, conservative commentary that has helped Heritage build a center-right majority in the nation as a whole. We need to preserve the American Dream, Israel reminded us.

With 13% unemployment and 50% of Latino high school kids not receiving their high school diplomas, how do we think that these Hispanics can survive in this economy and be the future doctors, lawyers, etc. of our country? This issue therefore becomes a national issue. Democrats will not benefit the Latino people. Getting stuff from the government does not help people. Israel mentioned an example from his own family who came from Mexico as immigrants and worked hard. This is an exceptional country. This country has more virtues than just money.

Silvio Canto gave closing remarks to the meeting and reminding the attendees that Israel is a frequent guest on his show that he transmits on his blog talk radio show.

I consider Israel my colleague in using Spanish media to inform the Spanish speaking community. I deeply admire and congratulate him and Heritage Libertad for their great work.

We encourage our readers to visit and share the page of www.libertad.org with those people who need to learn about our great country in the Spanish language and get informed about how the events in Washington affects our lives.

Alongside with VOCES Action the event was co-hosted with the Latino National Republican Coalition of North Texas and Silvia Canto from My View Talk Show.

Among the present were:

Israel Ortega, Daryl and Adryana Boyne , Rafael Cruz (father of Candidate for US Senate Ted Cruz), Jose Luis Reyes, Matt Garcia (from the office of US Congressman Pete Sessions), Ruth Armfield, John Stautner, Joe Peña, Micah R. Hobart, Silvio Canto Jr., Joseph A. y Elida Munoz, Sylvia & Carlos Perez, Jimmy and Denise Richardson, Nelly Carr, Mike Verdiguel, Lidia de la Cruz-Trujillo, Fabian Moro, Nestor Velazco, and Gustavo Bujanda from Telemundo. Four people born in Cuba, eight were born in Mexico, one was born in Spain, one was born in Colombia, three were born in Argentina, one was born in Puerto Rico, one was born in Germany, an six were born in the USA. All of us are American Citizens who love America.

All the people in attendance were very impressed with the work of Heritage Libertad and plan to use this website as a great resource for information among Spanish speaking people.

Adryana Boyne is the National Director of Voces Action. VOCES Action has been working in educating and empower the Latino community with Conservative moral and fiscal values in several states among our nation through TV, radio, press, conferences, debates and interviews. VOCES Action believes in free enterprise, limited government, individual freedom, traditional American values, and a strong national defense.

Group of people at the event