Remembering a Great American and a Great Republican: Joe Peña 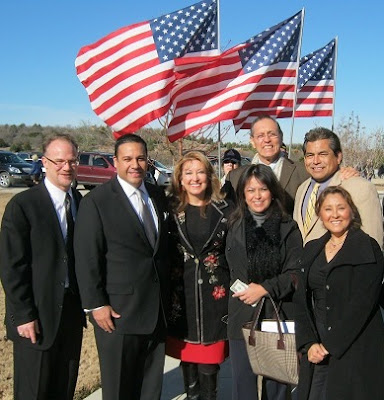 Remembering a Great American and a Great Republican: Joe Peña
By Adryana Boyne
Recently, Texas lost a great Hispanic Republican: Jose Peña. Joe Peña Sr. was born on Nov. 25, 1930 in Gary, Indiana and passed away Dec 25, 2011 at his home in Carrollton, TX. He is survived by his wife Gloria Peña, his son Joey Peña Jr., his daughter-in-law Linda Peña, and his granddaughters Gabby and Ciara Peña.

Joe was born in Indiana and his parents were from Spain; he was was a proud Hispanic-American. He served our Country and was a veteran of the Korean War and was important in the life of any Hispanic Republicans in the State of Texas. He was a believer in Christ and a man with integrity and leadership. Many lives were touched by Joe Peña and many have stories about him. Many of us carry a million dollar bill with the face of Joe as a reminder to “Vote Smart, Vote Republican.”

Joe was a kind man with a friendly handshake, a welcoming smile and a passion for finding precinct chairmen in non-traditional (i.e. non-Republican) precincts. Joe was crucial for the Republican Party of Texas and, alongside President George H. Bush, he was one of the main people starting the Republican National Hispanic Assembly. In 2009, Joe also became a founding member of the Latino National Republican Coalition of Texas and was a frequent guest at many Republican events. Many Hispanics were touched by the life of Joe Peña. Even a few days before he passed away, he was at the Dallas Republican Lunch encouraging people for the 2012 elections.

Here is an interview that Silvio Canto did with Joe’s son Joey and me regarding the life of Joe.
http://www.blogtalkradio.com/cantotalk/2011/12/30/saturdays-thoughts

Memorial Service at the National Cemetery of Dallas-Fort Worth: http://www.youtube.com/watch?v=htL8Zk77e4o

Here is the Memorial Page that Sylvia Guzman Acuff made for Joe's family:
http://memoriam.org/memorials/c711af06f5/
Posted by VOCES ACTION at 1:34 PM