Today I interviewed Laura Drain about her organizations : Alcanzando Metas and Hispanic Proffessional Women Asscociation Please liten to the show and learn more about Laura!
Please listen to the interview that VOCES Action did to Laura Drain. Minute 21:20
http://www.blogtalkradio.com/cantotalk/2009/10/27/Lets-talk-about-Hispanic-issues
Posted by VOCES ACTION at 12:41 PM

Today I was posted at the VOTO Latino blogsite. Here you can go to the link.

http://www.votolatino.org/events/2009/10/12/hispanic-heritage-month-or-mes-de-la-herencia-hispana/
Posted by VOCES ACTION at 10:04 AM 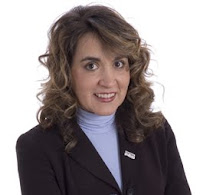 I met Laura Drain in 2006 in Washington DC, at a Republican National Hispanic Assembly Convention and she called my attention for her willingness to help and serve others around her. I heard how she expressed herself about the United States, with honor and respect. We just have so much in common: Both of us were born and reared in Mexico, both of us had immigrated to the USA, both of us married with outstanding husbands, both of us mothers of two children, both of us speaking Spanish as our mother tongue but have learned English, both of us conservative. To my pleasure I saw Laura again at the Republican floor of the Republican National Convention; both of us were elected at-large in our home state. I was a Delegate from Texas and she was a delegate from Virginia. She has just become an American few weeks before the convention! Laura was the Co Chair of Latinas for McCain's Chapter and Women for McCain in Virginia and DC. Then I saw Laura again in Texas at the Gov. Sarah Palin event where 50 Latino Leaders were honored to hear Gov. Palin. I saw Laura working very close and very hard in the Presidential campaign as we were worming for the Latino vote. Meanwhile, Laura and I got to know each other through the campaign, telephone and e-mails. She expressed her conservative values and surprised me with her accomplishments. Laura, in few years has done so much more than many others that have the blessing to be born and reared in the USA.

Laura came to the USA from Mexico in 1999 as part of career relocation with the Hewlett-Packard Corporation. Taking with her social, religious and conservative political values from Mexico she sought out to find community and political activities in her newly adopted home. Before she came to the USA, when she used to live in Mexico, Laura was involved with the conservative party, (PAN), and the Catholic church. Laura was very involved in volunteerism at Mexico’s most violent earthquake and that helped Laura in the foundation of Laura’s beliefs and views on government and politics.


In the United States, she formed in 2004 the Hispanic Professional Women Association (HPWA) www.hpwa.org, to provide networking and career support for Hispanic professional women around the United States, Latin America and Europe. In 2006 she started the "Alcanzando Metas Foundation" www.ametas.org , an education foundation dedicated to serving gifted Hispanic high school students in their preparation for higher education and entry into 21st century careers. In 2008 she became a citizen of the United States of America and was elected as the Hispanic delegate for the State of Virginia to the Republican National Conference. This conservative woman has given so much of herself, her time, her efforts, and her money in conservatives causes EVEN before becoming an American Citizen!

Recently, I went to Washington DC. Laura pick the team of VOCES Action at the Reagan airport: Two of VOCES Action board members, Dianne Salvagno Costa, Edna Cuellar McDaniel and I. Laura not only picked us up but took us for lunch to a beautiful place so we felt more than welcome in Washington. She went the extra mile to host us. I saw her working endless hours in a campaign that we were all very hopeful for. Laura , alongside with other outstanding Latinos leaders who were running for positions at a Republican Group, worked very hard. Other outstanding Conservative Republicans who are leaders in different areas came to speak on behalf of this team, among them were author and political commentator Leslie Sanchez, Tito Munoz (Tito the Builder) Mayor Dianne Costa and myself. Laura barely sleeps. Every day she was working, giving an interview for TV, helping someone, and she always doing that with a good attitude.

Sadly , that election was lost and I will not go in detail why that election was lost. What I will share is that many conservative Latinos were quite disappointed with the results of that election but God brought something better: A new organization coalition that was very much needed in America and with the same leadership that we all were trusting, Laura among them.The Latino National Republican Coalition.

I went back to Washington DC, and Laura and I attended several trainings together. One with the RNC as we both is Surrogates of the RNC and training with the Leadership Institute. She and I were in the same team, and we did alongside other people a great team work. There, in a case study I could relay in the wealth of business experience and technology that Laura has.

Laura strong Hispanic accent is not a problem. She really knows how to talk to the people. What can I say, I have an accent too! Laura is also the Founder and President of the Hispanic Professional Women Association. Having developed chapters over the last five years in the United States, Europe, and Latin America, Ms. Drain is a proven business leader who focuses on growth.


Currently, Laura has been expanding her knowledge of politics through participation in the Leadership Institute, assistance with the various Virginian political campaigns as MacDonnell for Governor . She is also an active member in the Republican National Hispanic Assembly of Virginia, Welcoming committee of the Republican Party of Virginia and the Fairfax County Republican committee, she was also Class 2009 of The Jennifer Byler Institute which mission is to increase the number of effective Republican women in public. (FCRC).

I not only recognize Laura for her political activism serving Hispanics in the Republican Party through her efforts. I recognize her also for her integrity, accountability and teachability. That with the character and the humility are great values in a leader. Laura is always willing to learn. Since VOCES speaks and educateon the conservative issues on life and family and the biblical principles, Laura always listens with atention. She stands strongly with us on thos principles. and with VOCES Action , she has showed support and has given to us great advice to the organization as well.

During Hispanic Heritage Month Laura Drain and I were named by the RNC among the "Hispanic Republicans Making Their Voices Heard." we were both very happy because we know we have work very hard for the values we stand for.
Recently Laura has been awarded by the Asociación Mundial de Mexicanos en el Exterior (AMME), as one successful woman in the USA.
I see in Laura Ramirez Drain a leader that knows that leadership begins with serving others. All those who know Laura, know exactly what I am talking about. She will continue the fight for what is right. Laura is presently helping now in Virginia's race campaign of Bob McDonnell for Governor and Ken Cuccinelli for Attorney General.
Voces Action has been motivated to go as Edna McDaniel and I are planning to go and help also in this election . Both are motivated for our love for God and for the people. Tito and Debbie Munoz have extended us their hand to go and help. We are looking forward to see many people there but most of all, I am looking forward to see my sister Laura and give her an abrazo of appreciation for all that she is doing. Congratulations to Laura Ramírez Drain and gracias por tu trabajo!
Posted by VOCES ACTION at 1:54 PM

On July the 4th of 2009 I had the honor to be one of the SPeakers at the largest Tea party in the whole USA. America's Tea Party:The Dallas Tea Party. Many people gathered there to celebrate our freedom. There were several speakers invited, among those Michelle Malkin which I really enjoyed meeting. Before me there were some speakers that broke the rule of their time and spoke longer than they were asked to so there were some bands playing too so I felt a lot of rush during the speech. THis is not my best speech delivery. I was speaking in both languages English and Spanish. The message was put in Univision afternoon news. SO the time was crucial and I had to SPEED!!!!!!!!!! Spo I apologize for speeding . As a matter of fact, I am very picky evaluator of my speaking engagements. As a good toastmaster I just have a tendency to judge my delivery and the delivery of others. I just did not enjoyed the speed of my delivery,but the message is there. We are a great nation! I believe in personal responsability and fiscal responsability. I believe in the established laws and in national soverignity. I believe we need to get an immigration solution.Please watch the whole 6 minutes even if the last ones are in Spanish becasue I make a statement at the end. Thank you.